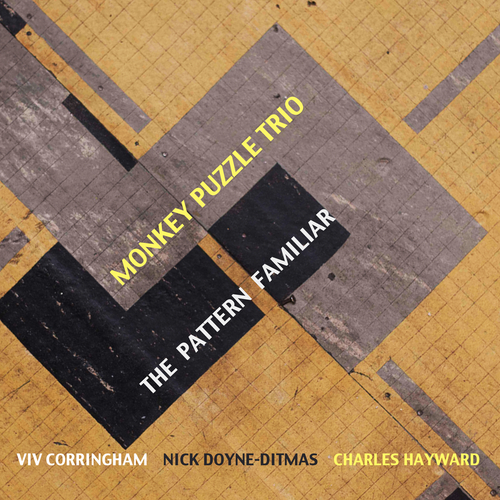 Their music is driven by the restless energy, invention and power of Hayward’s drumming underpinned by the languid and exploratory double bass playing of Doyne-Ditmas, to which Corringham adds, with the aid of a loop pedal, her unique collage of words and sound. Together they create a distinctive sound world, both exhilarating and immersive, which relies on the sensitivity and experience of all three musicians. All three musicians are obsessed with song as an ideal, and are adept and fast thinking improvisers.

The Pattern Familiar is the second album from Monkey Puzzle Trio and sees them expanding on the blueprint laid down on their acclaimed debut 'White World' [2010]. Harvested from three days of improvisation, the only watchwords were ‘aim towards song’ and ‘leave space for the brass section’. Shaped by Corringham’s lyrics, what unfolds is an abstract narrative about separation, loss and acceptance, a vibrant and energised song cycle that proffers a stark and resonant refusal of despair and the absurd. In spite of the subject matter, this is not a depressing music. JUST SAY YES. The music is an act of rebellion. Brass overdubs, orchestrated by Hayward and Doyne-Ditmas (and performed by Nick aided by Tom Marriott, Rob Mills & Tom Scott), are tightly conceived and highly organised, complementing, while contradicting, the spontaneous funk and sound art of the original improvisations, which have been savagely edited to further endorse the shapes and outlines of song.

The cover photographs by Lewis Hayward capture left over traces of 1950’s design, somewhere between electronic circuitry and atomic structure, dilapidated DIY superimposed on careworn Edwardian architecture, adding further resonance to the overall poetry of this startling and serious work.

"Their second album The Pattern Familiar is an improvised song cycle that pushes the very notion of the song to the extreme. Hayward hooks into motorik rhythms that are relaxed yet deliberate and Nick Doyne-Ditmas lays out reverberant, drifting moans, with overdubbed horns hinting at structure, over which Corringham's pursues arrange of techniques, from cool Brion Gysin-esque wordplay to looped and multilayered operatic wails." [The Wire]

"Edgy and distinctive, the music of Monkey Puzzle Trio is hard to pin down... ...Good stuff indeed." [Terrascope]

"On The Pattern Familiar they set about subverting the spontaneous, overdubbing tightly constructed horn lines on to open-ended improvisations and fashioning fully formed songs from Corringham's abstract narrative. An edgy listen, the album is made all the more engaging by its clever use of contradiction." [Mercury Recommends]

"The aforementioned brass section fill space inside Hayward and Doyne-Ditmas' rolling rhythms while Corringhams' stream-of-consciousness witters jumbled memories of seemingly mundane events, as though reading from pages of personal diaries being erased through her own stuttered cries and disintegrated language." [Rock A Rolla]

"…a treasure chest of everything musically imaginable" [Flipside]

"…a wild mix of avant rock and, out-there vocal improvisation and free jazz. Hayward and Doyne-Ditmas play hard and heavy, while Corringham samples and loops vocal fragments to create a dense vocal collage…. recalling a Band of Gypsies era cosmic jam fronted by an army of ghosts." [We Need No Swords]