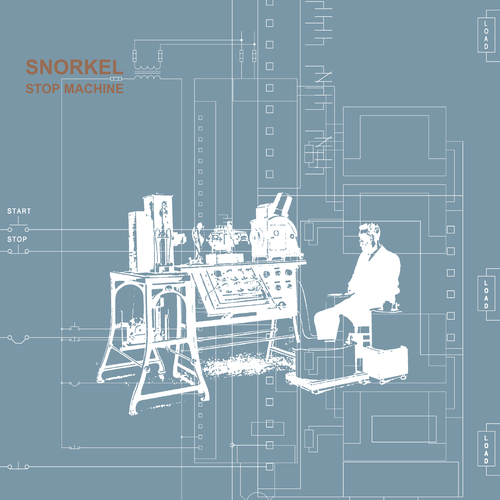 After a year of experimenting in their South East London studio, Snorkel have remerged focused and energized holding in its hands a brilliant new record. ‘Stop Machine’ recalls the improvised off kilter performances of their acclaimed first album 'Glass Darkly' and delivers a compact, robust and energetic route through post-funk, dub, electronica, krautrock and sonic art. Improvisation continues to be at the core of their strategy, from the agitated post-industrial experiments of ‘Driller’ and ‘Edgar’s Hoover’ to the aquatic drift of ‘Jellyfish’. A more compositional approach is evident in the swaggering and elastic grooves of ‘Stop Machine’ and ‘Loophole’, the slippery mood of ‘Wet Tongue’, and the dreamlike tension and release of ‘Dead Skin’, which incorporates the shadowy rhymed musings of eccentric soulster Charles Stuart.

Produced by Frank Byng and Snorkel

"...a vital flow of angular energy and unpretentious swagger" [The Wire]

"There are dark, playful combinations right through Stop Machine" [Mojo]

"Stop Machine is a very convincing hybrid, bringing disparate influences together to form a lopsided fourth-world funk of the highest order." [Cyclic Defrost]

"Highlights of the album are the unsettling, minimal drumbeats of ‘Edgars Hoover’ and the funky, hip hop influenced beat of ‘Dark Star’, but there’s never a dull moment on this album. ‘Stop Machine’ is well worth a few listens." [Live Music Scene]

"..‘Stop Machine’ sees the group delving deeper into more experimental territory as they continue to take on a highly creative approach with their music... ... an album that buzzes with activity, from its unique instrumentation to the brilliant way in which the percussion is explored throughout." [Shout4Music]

"This is not my usual bag, but in my head this is kinda what i want Tortoise to sound like. A Lee Perry / Can / Barry Adamson society-esque shunt of sweaty chimeric propulsion" [Cowsarejustfood]