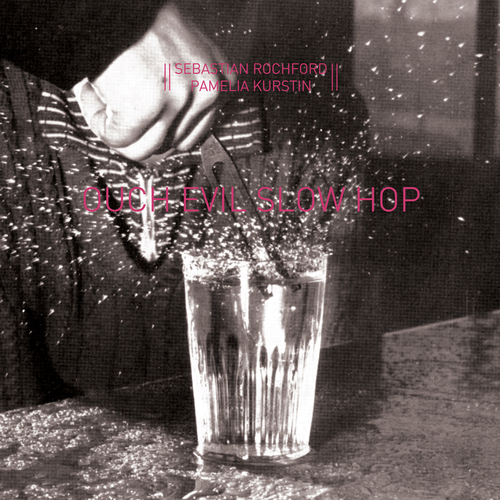 Slowfoot records are proud to present Ouch Evil Slow Hop, a collaboration between drum alchemist Sebastian Rochford and Pamelia Kurstin, the woman described by Bob Moog as “one of the most important innovators of the Theremin living today.”

Although aware of one another for a number of years, Seb and Pamelia first played together at the suggestion of Brighton’s Loop Festival, and subsequently recorded this album’s material in a Brighton studio, in a number of free improvised sessions then edited by Seb. Portishead’s Adrian Utley added his unique mixing angle, and Ouch Evil Slow Hop was born.

An album that defies simplistic categorization, it veers between eerie soundscapes, locked celestial grooves and explosive workouts. Sections have variously been compared to Herbie Hancock’s ‘Sextant’ era and Soft Machine locked in a fight to the death with Aphex Twin.

"...both the main participants are visionaries, and the music pulses with unexpected interventions and exhilaratingly strange turns... ...Rochford - the Brian Eno of a personal space between rock, electronica, jazz/improv and world music - touches everything he does with exultant mystery." [The Guardian]

"...a dynamic, questing collection that’s brimming with ideas deployed with lean concision and efficiency... ...a tumult hinting at the inherent scope and long-term potential of this compelling alliance." [BBC]

"This collaboration between Brit-jazz drummer extraordinaire Rochford and theremin maestro Kurstin, mixed by Portishead's Adrian Utley, pretty much manages to blow away any pre-concieved notions of what such a duo might sound like straight off" [Rock A Rolla]

"...One of the most defiantly strange albums of the year so far... ...an ideal cure for the restless ear" [Narc]

"'Ouch’, the first piece to be made available from the record, is a thudding, bass-heavy track that sits somewhere between Herbie Hancock, Archie Shepp, and Venetian Snares." [The Line Of Best Fit]

"...the free rhythms and scorched electronics are more reminiscent of the more outré aspects of the Aphex Twin back catalogue." [Clash]

"...fearless and adventurous and never anything less than exciting" [Music OMH]

"...and in the stellar musicianship in evidence both on this album and elsewhere, it's clear that when they're jamming together Rochford and Kurstin can do anything" [Drowned in Sound]

"...when I first played this album: a giant smile spread across my face. All music should do this." [The Liminal]

"Overall, the album feels like spending the night locked in a video arcade, and enjoying it" [Jazzwise]

"Ouch Evil Slow Hop is chock full of an inquisitive dada spirit, undoubtable instrumental prowess and modern studio alchemy, rendered into shiny rare-earth ingots and pure sine waves, then reconstituted anew to astound and inspire in equal proportion... ... could possibly be the missing link between Aphex Twin, Zeena Parkins, Battles and Supersilent – get on board." [Cyclic Defrost]