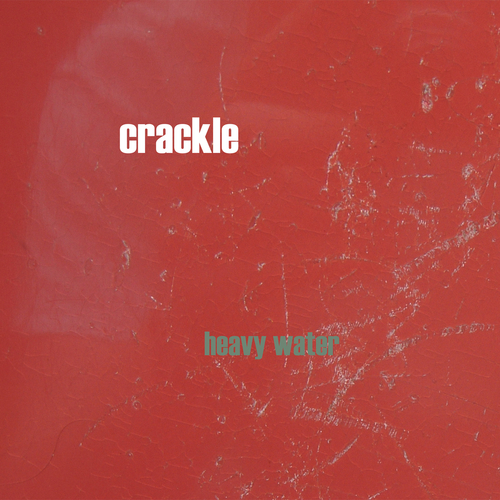 Loosely inspired by the post-drop out novel Stone Junction by Jim Dodge, Heavy Water steals a glimpse at the toxic monstrosities brewing in pop's occult laboratory - the dark and dangerous world music constrained beneath its bubblegum smile. Elegiac cornet and haunting melodica sound a thematic last post over a seething rhythmic morass, and conjure premonitions of an imminent crash landing.

Starting from the drums and bass, CRACKLE deploy an unconventional arsenal of analog vs digital instruments, strange treatments, close miking, forced processes, chance and accident, as techniques to unlock something both strange and familiar. Details are amplified, spaces are filled and emptied, surfaces are polished or tarnished, unstable elements are left to react...

The result is a low-end excursion into the cracks between dub, electronica, future-past world sounds and freer jazz imaginings. Although one can hear echoes of the strategies of Eno, the obliqueness of Perry, the widescreen of Morriconi and the free-spirit and musicality of Codona, Heavy Water maps its own trajectory to create an album that is impossible to pigeonhole.

"So varied and fabulous an album - by local mavericks Nick Doyne-Ditmas and Frank Byng - that we have trouble selecting this one cut, but fans of Miles Davis, Augustus Pablo and Isotope 217 alike will fall fast for its ineffable cool." [Time Out]

“…the pair take in the heavy, messy art-funk of Material and other downtown types, the lateral thinking and mixdown trickery of Brian Eno or Holger Czukay, and the textural understanding of This Heat.” [The Wire]

"...an electrifying cross between slumberland-trekking In a Silent Way minimalism and heavy, heady dub." [Kruger Magazine]

"...when they hit top gear the results overwhelm the senses" [Rock Sound]