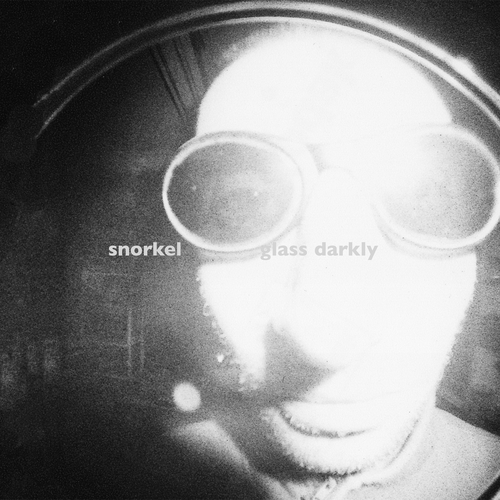 Glass Darkly is the debut album of improvising collective SNORKEL - their live sound was captured over three freezing days in a studio behind a fish factory, before retiring to the warmth of snorkel studios to extract the key moments from these sessions and apply some finishing touches.

The album opens with the slow build of the post-apocalyptic opener As the Dust Settles from there the edgy mood is sustained - riding the turbulence in Carpet Flying, grappling with the angry rattle of Alligator, avoiding obstacles in the cut and run of Rub Attractor/My Elephant, before self-deconstructing with the squat pop finale of This Headphone Mix.

Glass Darkly captures the spirit of the band's spontaneous performances and the rough-edged guerilla tactics of a band addicted to the dark side of the groove, who leave their audiences with "the ghostly jam of Miles Davis, Sonic Youth and Lee Perry smeared all over our asses". [Paul Hawkins/3Barfire]

"...the spirit of Ege Banyasi-era Can looms large... There is also a debt to This Heat's post-Prog experimentalism in the detailed tinkering: tape loops, primitive Casio electronics, squelchy moog basslines...borne along by the momentum of a spontaneously self-generating groove." [The Wire]

"This debut from the South London sextet is bathed in the rhythmic propulsion of Can, spiky post-punk Moog/guitar interplay, and the dissonance of This Heat" [Uncut]

"Like having your head squeezed a full fathom five down, the pressure here is good... throwing in an MC, some synths and a damn fine bit of drumming, this is deeply grooved and experimental stuff" [Clash]

"Glass Darkly is a refreshingly categorization-resistant blast of unsettling sounds to stroke chins or bust a move to." [Kruger magazine]

"Glass Darkly proves to be an audacious yet highly successful experiment in leftfield, futuristic astral-Jazz fusion, always twisting and turning, yet never losing sight of its melodic aesthetic. To provide such consistency through-out the album is a major feat and listeners will undoubtedly have the CD on constant rotation." [experimusic]