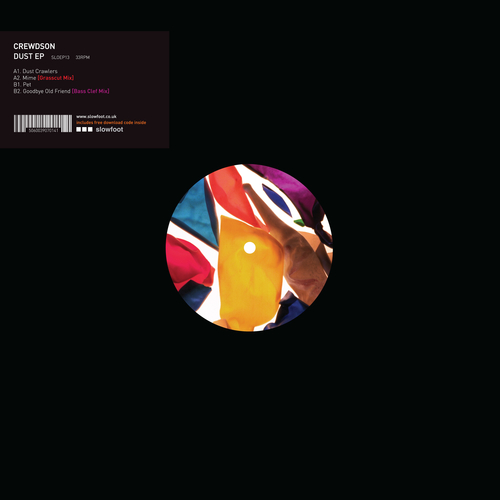 Debut release from new signing Hugh 'Crewdson' Jones, soon to be followed by his full length release 'Gravity', scheduled fto hit the shops early next year. His music could be described as an upbeat and playful concoction of electronic music, taking in influences from techno, jazz, 2-step, dubstep, your doorstep… poses the question of what might happen if you threw Polar Bear, Flying Lotus, Aphex Twin and maybe even The Streets in a room together.

Here you get 2 tracks from Crewdson leading each side of the vinyl (‘Dust Crawlers’ and ‘Pet’ for A and B respectively) followed up by equally intriguing remixes and reworkings of Crewdson tracks. ‘Mime’ reworked by Ninja Tune’s acclaimed recent signing Grasscut and ‘Goodbye Old Friend’ remixed by 'Hackney Centalist' Bass Clef [Blank Tapes].

"Deeply inventive, forthcoming EP 'Dust' has already gained some fantastic reviews. Removing the flab from dubstep, Crewdson harks back to the skeletal post-garage of Burial - emotive, introspective and shrouded in mystery." [Clash Magazine]

"Dust Crawlers is typically slippery, constructing delicate cascades of sound from tiny percussive events and whisking the listener through a bewildering succession of reverb spaces. Confident, and just about confusing enough to be fascinating." [The Wire]

"Tricky 'tronica styles from London's Crewdson readied with remixes from Bass Clef and Grasscut. Unavoidable comparisons to Mount Kimbie or Matthew Herbert are well warranted on the complex, jazz-structured intricacies of 'Dust Crawlers' or the spindly glitch sound of 'Pet', while Grasscut turn 'Mime' into a fractal IDM pop moment, kinda like The Chap in a fonky K-Hole, and Bass Clef gives 'Goodbye Old Friend' a healthy dancefloor workout". [Boomkat]

"...showcases his unusual yet inventive approach toward assembling beats in an ad hoc manner" [Lineofbestfit]

"Dust EP is a phenomenal debut, proving that Crewdson will be one to watch in the future" [Igloo]

"There’s a disembodied voice kicking around the sound of a hundred cassette decks unspooling at once. But he’s got a beat to counteract, tiny percussion and a broken snare, as though he’s throwing the literal kitchen sink full of instrument junk at our stupid American desire to box him in." [Fader]

"With his hybrid sound Crewdson certainly is one to watch in 2011. Ahoy!" [Electronic Beats]

"Crewdson steps boldly into the scene with an EP which feels like a strong statement of intent. Certainly if these tracks are anything to go by we can expect great things from his full length album out next year." [Future Sequence]

"With a debut full-length album rumoured to be out in the second quarter of 2011, Crewdson on this riveting form will emerge triumphantly from the shadows of his contemporaries, only to scuttle away into his own dark monolithic, brooding shadow of beguiling imagination he can claim as his own. Go. And. Get." [The 405]